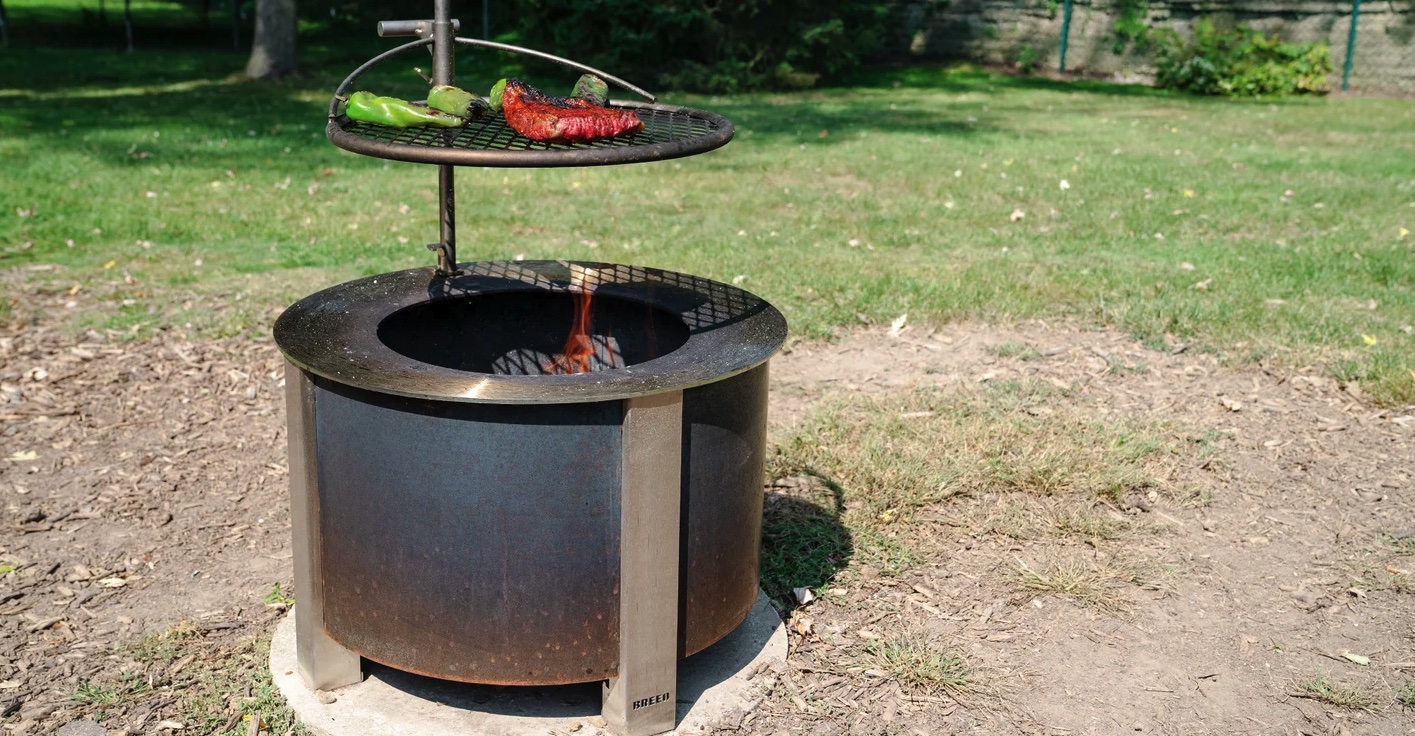 How Does a Smokeless Fire Pit Work?

One of the key downsides of lighting a fire pit is the amount of smoke you have to contend with as you sit by the fireplace. This can even make you change your mind about starting a fire. However, with the right techniques and smokeless fire pit fuel, you can have your fire and enjoy it.

It all comes down to the smokeless nature of the fire. Keep reading to learn more about smokeless fire pits.

Yes, they do. The combustion mechanism and high-temperature output make smokeless fire pits a highly efficient and virtually smoke-free burner. In addition, the design features a unique airflow system at the base of the fire pit. This ensures there is enough oxygen for primary combustion.

After placing the firewood or wood pellets in the pit and setting it ablaze, the air around the logs combines with heat from the expanding fire to bring about primary combustion. As wood burns, the fire builds up.

Check this too: How to Install a Pellet Stove in a Garage

This differs from traditional fire pits due to the increase in airflow. Fires need oxygen for combustion, and when it is starved of air, the fuel fails to burn completely, turning into dense smoke and soot.

Then comes secondary combustion. This is where the magic happens. The walls heat up as the fire burns, and the hot air trapped between the two walls becomes less dense and begins to rise. The hot air then escapes the wall cavity via a series of holes along the rim of the smokeless fire pit.

The heated, compressed oxygen reacts with the smoke produced during primary combustion, causing it to burn again. Thus, a smokeless fire that you can enjoy no matter the occasion.

Where does the smoke go on a smokeless fire pit?

The smoke from burning wood is captured in a double-walled structure that then reburns it so that less smoke escapes. The pit is engineered so that the airflow feeding the fire mixes with the rising smoke. So instead of being expelled into the air, the smoke is burned off.

Do smokeless fire pits give off heat?

Compared to conventional types, you get more heat output from the same amount of fuel. The double-wall system also helps maximize heat efficiency— a perfect warmth machine and heat source for open-fire cooking in your backyard.

Are smokeless fire pits worth it?

Yes. Aside from the reduced smoke benefit, it also has other benefits;

A smokeless fire pit directs oxygen into the fire, which increases the combustion and allows it to burn hotter with less fuel.

Better fuel efficiency also saves you money. Despite the hefty initial cost, in the long run, you will save money by having a fire pit that’s fuel-efficient.

It’s Better for Your Health

The firepit smoke gives off has a mixture of toxins harmful to our health; these include:

These chemicals affect heart and lung health. A smokeless firepit is a great way to let your high-risk friends and family enjoy being around a fire.

It’s Better for the Environment

When forests are logged, there are fewer living trees to take in the CO2. Therefore, increased levels of CO2 in the atmosphere are a cause of climate change. Additionally, fuel efficiency makes this fire pit better for the environment than a regular fire pit.

They are not completely smokeless. On account of the smoke combustion, the stove produces much less smoke odor. But there will still be leftover smoke released into the atmosphere, albeit very minimal.

Smokeless does not mean no smoke, just greatly reduced smoke. You may get a little at the moment when new firewood is added, but it usually passes quickly.

How do you make a regular fire pit smokeless?

Here are some reliable tips for having a smokeless fire pit;

1. Use Well Seasoned or Kiln-Dried Firewood

If you want to reduce fire pit smoke effectively, using the right wood at the right moisture level will give you the most bang for your buck. Freshly cut wood, a.k.a. “green” wood, is made mostly of water, and that water will smoke badly.

Firewood dried/seasoned over time will naturally have a lighter feel when handled, have a hollower sound when contact is made, no noticeable smell, and a bit of a gray tint depending on the seasoning conditions.

Hardwoods tend to take much longer (6 months to 2 years) to season to a moisture content of 30% or less, but they will burn much longer and hotter than any softwood ever would.

When prepping your woodpile, understand what wood you are working with and how long it will take to season after being freshly chopped.

Because of their natural density, hardwoods tend to hold much less water than other types of wood. Oak, ash, hickory, and maple are good examples of low-smoking hardwoods. On the other hand, hardwoods that smoke more than others include eucalyptus, poplar, elm, and others.

Softwoods like pine, spruce, cedar, hemlock, fir, etc., have a reputation for producing more smoke than other types of wood when burned. This is because dried pitch or sap can smoke heavily in a fire pit fire.

3. Take the Time to Build a Fire That Starts Quickly and Burns Long

The way you stack your firewood in your DIY smokeless fire pit will directly impact how quickly the main fuel sources ignite and start to burn efficiently. A key component to building a quick-starting long-burning fire is good airflow.

A teepee or log cabin firewood stack will keep air flowing and provide space for tinder and kindling. Good airflow between the pieces of firewood is the key difference between a fire that lights quickly and one that smolders and smokes.

4. Keep Your Fire Pit Clean After Every Use to Reduce Fire Pit Smoke

Always clean your fire pit before starting a new fire. Old fire pit debris may become damp if left out in the elements. Building a new fire on top of this debris may inhibit your ability to start a good fire.

Old and potentially damp ash, embers, and other debris accumulated in your fire pits from recent burns will slow down the ignition of your current fire, resulting in a fire pit that won’t catch and will smoke a lot.

5. Do not burn household waste

Certain types of treated cardboard will smoke heavily when burned in a fire. Not only will you have to deal with the smoke, but you may also get exposed to fumes that may not be healthy for you.

Do not throw trash, cans, or other debris into the working smokeless fire pit. It might be fun to watch burn, but it’ll produce a nasty smell, clog the airflow, and be a hassle for you to clean up later. Instead, keep a trash can nearby for people to throw their trash away.

If you use pine needles, pinecones, tree bark, etc., as kindling or tinder, ensure they are properly dry, as wet pine cones produce excessive smoke. Also, ensure you store it properly. Keep the wood scarps and kindling at least 6 inches off the ground, mostly sheltered from the rain, and adequate airflow on all four sides. The same goes for your firewood.

Fire pits have evolved quite a bit in the last few years, going from simple metal bowls or masonry fire pits with a fire ring to a new take on old technology known as top-lit updraft gasifier or TLUD.

These fire pits are built with a double wall structure that utilizes a unique air circulation system to feed the fire and burn off excess smoke before it escapes. There are currently four primary players in the smokeless fire pit industry: Solo Stove, Breeo, Flame Genie, and Tiki.

How Many Amps Does a Garage Door Opener Use?

Why is the Garage Door Opener Light Not Working?